How is Asbestos Cancer Treated?

When a patient has symptoms of asbestos cancer, the doctor is likely to order blood tests and chest X-rays or CT scans to look for abnormalities. If there is a growth or tumor, it will show up in these tests.

If something shows up in the tests, and the patient has a history of working with asbestos, it might indicate that the patient has mesothelioma, the medical term for asbestos cancer. A biopsy is often done to confirm a diagnosis. During a biopsy, the doctor takes a small piece of the growth—either through a needle or surgically. A pathologist will examine it under a microscope and be able to tell if it is asbestos cancer.

So You Have a Mesothelioma Diagnosis. What Now?

When a patient is diagnosed with asbestos cancer, they have some decisions to make. There is no cure for the disease, but there are treatments to relieve symptoms and increase survival rates. Patients will be referred to a specialist who can explain all the available options. Oncologists and surgeons who specialize in mesothelioma cases may work together as part of the treatment team.

The choices for the treatment of asbestos cancer depend on several factors:

Besides the traditional methods of treating mesothelioma (which we discuss in the next section), doctors may suggest clinical trials. There are many research programs that are studying the disease. It is sometimes possible to try new, experimental drugs and treatments in addition to what is normally prescribed. A doctor can suggest programs that might offer the patient improved results. 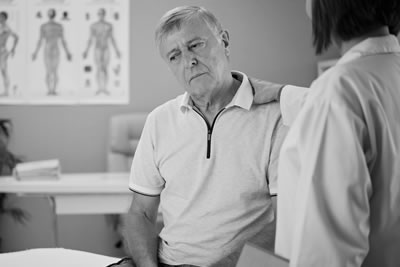 The type of mesothelioma surgery that a doctor recommends depends on how far the asbestos cancer has spread.

If there is a small tumor on the lung, surgery might be performed to remove it. Larger growths might require the removal of an entire section of the lung called the lobe.

Unfortunately, asbestos cancer often has a chance to grow before it is diagnosed. Because mesothelioma affects the lining of vital organs like the lungs or heart, surgery is tricky when it has had a chance to spread. In some cases, an entire lung might need to be surgically removed. In the most extreme cases, the surgeon may remove not only the lung, but also the surrounding tissue and lymph nodes.

Certain surgical procedures might be done even if removing the tumor isn’t an option. Surgery may be done to drain fluid from the lungs. This will release the pressure buildup, making it easier for the patient to breathe.

Radiation works by focusing high-intensity beams on cancer cells to shrink or kill them. This will help reduce the symptoms that the patient is experiencing. Radiation is often used to help kill any cells left behind after surgery to remove a cancerous mass. It is also an option to shrink tumors when surgery isn’t an option.

Chemotherapy also works to kill or shrink cancer cells but uses chemicals instead of beams or radiation. Chemo drugs enter the bloodstream or are sometimes injected directly into the affected tissue. Treatments can make a tumor smaller before surgery so the operation will be easier. Used after surgery, it can help keep the cancer cells from returning.

It is common for doctors to suggest a combination of these therapies. Attacking the cancer with several different methods is called multimodal therapy. This can sometimes get better results than just one type of treatment.

How Much Does Treatment for Asbestos Cancer Cost?

Since every asbestos cancer patient’s treatment plan is different, it is hard to give estimates of what it will cost. The one thing that all cases have in common is that they will be very expensive.

Surgery, radiation or chemotherapy drugs can costs patients and families thousands and thousands of dollars.

In addition to the treatments themselves, costs will add up for other things related to the patient’s condition:

Even with good insurance, these expenses can be a catastrophic burden on a family.

Since mesothelioma is clearly asbestos cancer, and the treatments are meant specifically for that disease, it is possible to get help with the cost. Visit our Paying for Treatment page to learn what options are available.